Perrie Howes
I am a pretty high-energy, positive individual with a mind for organization (as I've been told). I've worked in various fields requiring "start-up" energy — from corporate creative services, self-employment, and even being a pastry chef. It's been a fun career path, to say the least.
SimpsonScarborough came on my radar in 2019. It was really fortunate timing as I was casually looking around for the next step in my career (specifically in creative project management), and Cole Londeree (Creative Director) sent me the job posting for the Director of Creative and Digital Operations. It was familiar enough work, but in an agency setting which was new to me. Long story short, I went for it! Since then, the role has taken a few turns here and there, finally landing as Director, Project Management Office (PMO). In project management, you have to work with nearly everyone in the agency. The day-to-day work keeps me on my toes, which is a different kind of "love" for the job. But it's the varying personalities of my colleagues that I absolutely adore.
In early 2021, I had a lot of new adventures on the horizon. Professionally, Chelsea Woodard (AVP of Ops) and I were on the cusp of launching a significant reorganization of the operations division that included creating an operations team beyond the two of us to handle finance, HR, and launch a distinct PMO division. It was exciting, but as anyone familiar with change management and integrating new ideas might understand, it was a lot of work!
Personally, I was settling into a new life in Georgia (formerly in the Buckeye State), and it was around then that we told the world we were expecting a baby at the end of summer.
I didn't know it at the time, but the shifting priorities of parenthood would collide with a significant step forward in my career of leading and building the PMO team. I'll just do both, I thought. I went into maternity leave with an open mind and the intention of balancing both my full-time job and motherhood. However, after a few weeks back from my leave it became pretty clear that it wasn't going to work the way I had imagined.
Working through this balancing act for two months was one of the most challenging times of my life. I absolutely love my job, but it was daunting to even think about changing my career. I helped create a new division for a company I love — it was difficult to envision not staying on board to lead the charge and see the plan through.
But I have a baby. 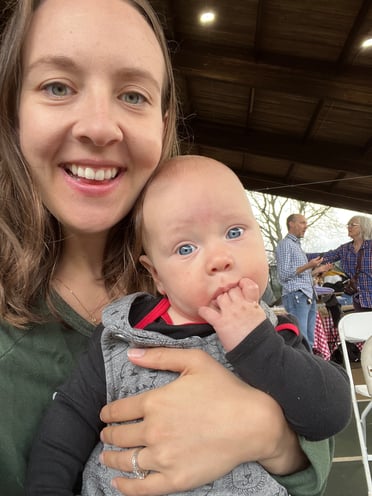 I'm not really a kid person, but I'm obsessed with this one. I was lucky enough to work from home, but anyone who has a tiny human knows there's no working from home while simultaneously being home with a baby. Literally impossible.
Thankfully, I was in a place where I could consider part-time work. This doesn't come without dramatic life changes. As if having a child isn't dramatic enough, let's just keep the changes coming!
I know now why they say to never underestimate a mother. My capacity for finding an answer that worked for us was enormous. While considering my options, it became clear that I needed to cut down my work to maintain the balance of my life and my own mental well-being.
So, I summoned the courage and told SimpScar that I needed a change.
Once you let the cat out of the bag by saying something like that, you can't go back — that was my biggest point of anxiety. I'm not a quitter and it was tough to express my feelings. And, I didn't know if going part-time would be the right decision for us. Would staying home actually be fulfilling once the newborn honeymoon phase wore off? Would SimpScar actually agree to keep me on if I asked?
But they did. It was so graceful how it happened, too. I just asked, and they said, "Yes, of course. Let's figure out what you need and what we can do to support you." I felt like I was seen as a person and valued as an employee. I felt that leadership knew I was a new mother; they understood what that meant personally and wanted to support me in my pursuits. It was such a relief to know that I could continue the work I was proud to do at a company I admire while supporting my family and spending more time with my tiny human.
Now I'm SimpScar's Operations Specialist, and I spend focused time doing those initiatives that our team just didn't get around to doing.
Parenthood is nothing short of amazing. It's the best thing I've ever done — my purpose in life. I understand why mothers are mothers and why family is so important. Love, strength, anxiety, and belonging have all new meanings for me.
Some days are 100% magic, others have a bit of second-guessing and what-ifs. And, of course, there are days that just need to end (thankfully, these are few and far between). I try to remember that when I desire a bit more out of my career, the time will come again for that to happen. And on the days when it's hard to find the quiet hours to go online, this journey of parenthood is worth it, too.

Perrie Howes has been with SimpScar since July 2019, and in that time has brought incredible organizational clarity and operational excellence to our work. Make no mistake; you'd be hard-pressed to find a project that doesn't have Perrie's fingerprints all over it — always for the better. She holds a B.A. in Sociology & Anthropology and Environmental Science from Ohio Wesleyan University and lives with her husband, son, and two dogs in Athens, GA. Learn more about Perrie and the rest of our team here.
Share by Email Share on LinkedIn Share on Twitter